As we’ve seen in previous posts, calling something “Interest Based Bargaining” does not necessarily make it effective.  I would argue that some processes parading around as IBB, really shouldn’t even have that name.  In fact, I’ve started calling the processes I use “collaborative problem-solving” to avoid the confusion of IBB all together.

Today we’ll delve into five key components that must be present in an IBB process for it to work.  These key elements include the following:

The BIGGEST complaint I hear about failed or frustrating IBB process is that they take too long and are unfocused.  It’s almost as if once teams abandon traditional bargaining approaches they throw structure to the wind and simply tackle issues as the spirit  moves them.  This approach is not only inefficient, it breeds uncertainty which can delay and ultimately prevent good solutions.

To succeed, groups need an agreed upon structure and process.  This includes agreements about each of the following: 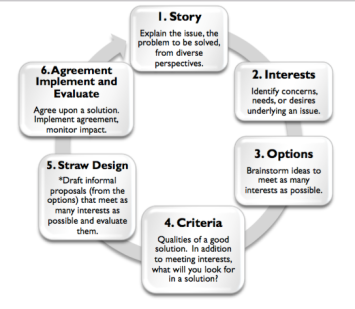 For this last point, I use the IBB cycle that I learned from Susan Sparks in my first experience with IBB and I tell you, it works!  This six-step cycle is a literal road map for our discussions on each and every issue brought to the table.  The cycle helps makes sure the right information gets out in a timely and thoughtful manner and naturally directs teams into workable solutions.  Even better, as teams get better and better at using it, the cycle lends additional efficiency to teams.  Rather than wasting time or repeating themselves, team members can feel confident and relaxed as they jointly explore and resolve issues together.

Outside of the bargaining room, the IBB cycle is useful for all kinds of collaborative problem solving.  Indeed, I have used it with everything from elementary playground supervisors to city-wide transportation departments.  Whenever you have a broad group of stakeholders trying to solve a problem together, the IBB cycle is an invaluable tool.

Along with a clear structure and process, teams need clarity on how they will make decisions.  The IBB cycle tells us how we’re going to talk about things, the decision-making rules tells us how we know when we’re done talking and have a solution that the team will support. Sam Kaner does the best job of explaining possible options in his handbook, Facilitator’s Guide to Participatory Decision Making. I strongly recommend this resource to anyone who finds themselves running meetings and trying to help groups reach decisions together.  It is an invaluable resource. Like the IBB cycle that I use, these decision-making rules are incredibly useful outside the bargaining room.  Indeed, I think most organizations would be well served to clarify these rules and explicitly include them in their everyday meeting agendas. 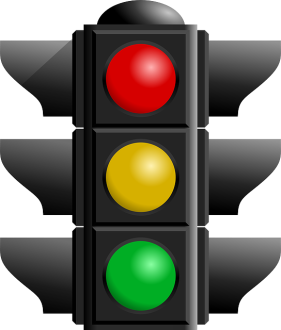 Most of the groups I work with in bargaining adopt a consensus model for decision-making.  This word “consensus” itself is problematic and often poorly defined so teams must also define what consensus means to them.  In my experience, while unanimous agreement (100% of the team fully agrees with the solution) is ideal, “sufficient agreement” (which we generally define as 85% of the group agrees with the solution) is adequate and more practical.  Coming to agreement on how much agreement you need in the future is a tricky conversation indeed.  Thankfully, in discussing and reaching consensus about consensus, teams are able to practice the skills of deep listening, perspective taking, and creative problem-solving that they will be employing for the rest of the process.  Furthermore, reaching agreement about how to define agreement can be very empowering!  I, for one, always breathe a big sigh of relief and feel a surge of confidence when my teams reach agreement on their decision-making rules.

As a facilitator, it is always my preference for teams to reach agreements on their own and to be able to truly, collectively “own” them.  When this isn’t possible, teams shouldn’t despair or feel a sense of failure.  Instead, they should celebrate the degree to which they were able to work together, and congratulate themselves for having through through and planned for so many potential outcomes.  Establishing basic decision-making rules and contingency rules up front increases certainty and confidence in the process.

Adequate Training so Participants Understand and Apply Agreed Upon Structures

Did you ever see the 1809’s movie The Gods Must Be Crazy?  In this comedy, a tribe in Botswana if thrown into turmoil when a Coca-Cola bottle literally falls into their hands.  Without the modern, western cultural background to fit the bottle into context, the tribe puts the bottle work in a slew of ways and ultimately fights over this “priceless” object.  While at times absurd, I think the story is not so different from other situations when we give teams new tools but don’t take time to explain them and train them to use the tools effectively.

In this way, it’s not enough to simply have an agreed upon structure and process.  For these expectations to be truly shared and truly work as a resource for the group, team members must be trained to deeply understand them and apply them effectively.  While much of this understanding will be developed throughout the process (think learning by doing) teams require an adequate foundation of understanding before they begin.

I begin all my bargaining teams with at least a half-day of grounding in interest based principles, the basics of the process, and decision-making rules.  Only after we’ve explored these ideas together do we begin to apply them to the first real issue. Generally, we try to pick some “low-hanging fruit” or issues that are not so complex as to muddy the waters.  These easier issues serve like training-wheels; they help the group get comfortable and build confidence wit the process.  Although it may take us an entire day to train the group and resolve just one of these early issues, the time invested up-front is absolutely worthwhile in the long run.  Indeed, when teams go slow and do things right from the beginning, they find they can pick up speed and go faster and faster towards the end of the process.

Exploration and Respect for BOTH Sides’ Interests 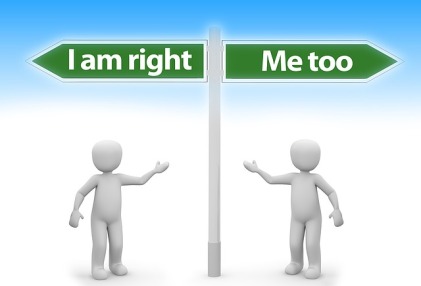 To explore and honor both sides’ interests, teams have to understand what interests actually are (and what they are not) AND take the time to look around at the other sides’ interests too.  While this seems simple enough, it’s amazing how often it gets muddled up.

In talking to one group recently, they told me that IBB wouldn’t work for them because they had already decided what they wanted, they knew that the other side wouldn’t agree, and they saw no room for compromise.  Put simply, they had already established a position.  It’s true that if you’re set on a position that’s not agreeable to the other sides’ position (as in traditional bargaining), you are indeed stuck.

With interest based bargaining, however, this is putting the cart before the horse.  In an IBB model, you’d need to back things up and get back to what’s behind the position.  Understanding the why helps uncover the actual interests.  While positions can conflict (and often do!), interests don’t necessarily.  In fact, it’s likely that in focusing on interests, creative possibilities surface that are more workable in truly meet the needs of all the parties. Particularly if you’ve been using a traditional model for a long time, this can be a difficult shift.  A skilled facilitator can work wonders in probing groups to understand their why and get clear on their interests.

In another case, I recently talked with an Human Resources professional who told me that her previous experience with IBB hadn’t gone very well because it seemed like the other side only wanted to talk about THEIR interests.  Even worse, it sounded like this group wasn’t really even sharing their interests but rather, they simply labeled their positions as interests and hoped that management would satisfy them.  Put simply, this is NOT Interest Based Bargaining.  Saying, “I have an interest in a 5% raise” does not make it an interest!  Instead, these teams are likely to have an interest in feeling valued, being treated fairly, having their work and efforts respected, supporting their families, etc.  THESE are interests.  While a 5% pay raise MAY satisfy these interests, this is simply one option.  Separating positions from interests can indeed be tricky work but it’s critically important.

Similarly,  it’s critically important to consider multiple interests.  In labor negotiations, this means that the interests of both the union AND management are considered.  With the above example regarding compensation, management may identify an interest in having sustainable budgets.  They may have an interest in being good stewards of their funds (be they accountable to taxpayers or investors).  They also, likely, have an interest in attracting and retaining the best workforce possible for their industry.  Framed in this light, the possibilities are much more broad than they would have been if the sides started with a position of X% pay raise, for example. If both sides have understood one anothers’ stories and interests, it creates a sense of goodwill and earnest effort to brainstorm and evaluate options that will satisfy BOTH sides’ interests.

Time, Space, and Support for the Group to do its Best Thinking

Aside from all these procedural details, small logistics make a big difference in supporting teams engaged in IBB or collaborative problem solving of any sort.  At a bare minimum, teams need adequate time and a functioning space to do their work.  Further, they need elements of support from food to facilitation and note-taking to make the work progress smoothly.  I find groups are most successful when:

Ultimately, IBB processes can take many forms.  Facilitators and teams all bring personal histories and styles to the work and even the same teams may look different from year to year as they bargain.  Regardless, these five keys (clear structure and process, decision-making rules, adequate training, respect for both sides’ interests, and adequate time and space), MUST be present for the process to succeed.

If you’ve experienced different forms of IBB, I’d love to hear about it!  What else do you think groups need?  What ideas did I present here that you might see in a different way?

If you’re a part of a group with a difficult problem to solve, I’d love to hear more about that too!  As I mentioned above, the techniques of Interest Based Bargaining are useful when applied to all kinds of different contexts, not just contract negotiations.  Contact us today to find out of an interest based process might help support good decision making in your team and put you on a solid path ahead! 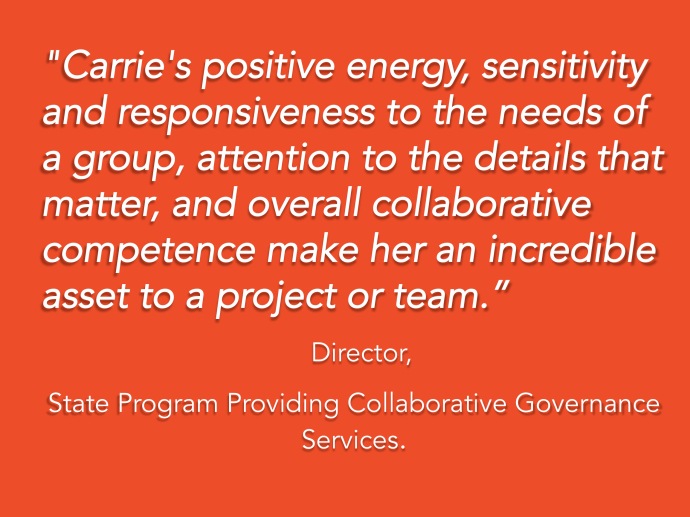 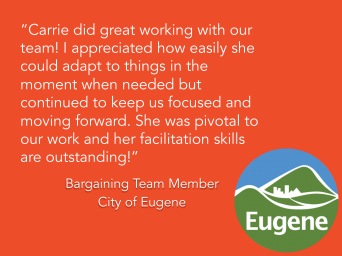 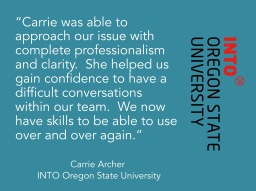 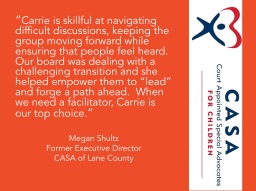 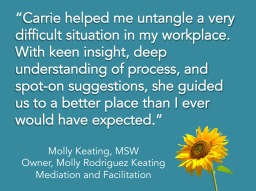 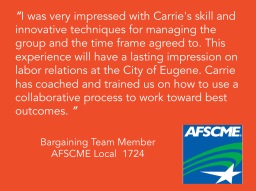